I am Caroline and I currently work as Director of Sporting Academies at a secondary school in the north east of England, this has be overseeing our Cricket and Rugby academies as well as delivering the Football to both girls and boys. I spent 12 seasons coaching at the Sunderland Regional Talent Club, the Girls equivalent to the boys Academy set up. As well as 10 years working as a Football Development Officer, delivering football sessions as well as Primary School PE. 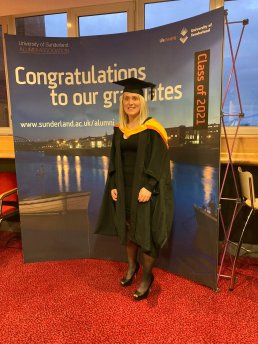 I have recently passed my Masters degree in Sport and Exercise Science, having completed my Bachelors degree in Sport and Exercise Science back in 2008. Giving me and extended knowledge into more areas of sport and being able to push myself to the limits and getting back into academic writing. My Masters dissertation was The Impact of the Menstrual Cycle on Female Footballers in training and matches.

When at University I began learning more about coaching and started my FA Football Coaching qualification journey way back in 2005! Over the years I have gone on to do my level 1, level 2 and then level 3 aka UEFA B as well as the Youth Modules (One, Two and Three) which I then passed for the FA Youth Award. I have also studied the Futsal coaching route as well, and have my level one and two qualifications. As well as football I have England Athletics, level one and leadership in running fitness. Dodgeball level 2.

I have had a season ticket for Newcastle United for 17 seasons now and attended games for many seasons before that, I have been to many away games as well over the years and looking forward to the more positive future under the new owners, after many years of neglect our football club now has a chance to grow and shine!

I played for a lot of different football teams around the north east and during this time I started running 11 years ago for my first ever Great North Run. Since then I have gone on to run 8 marathons with more possibly pending in the future.

I love everything about sport, exercise and fitness and very passionate about the development of women and girls sport, now that so much more research is being completed and more focus on the different events.