Everything from the expo, to the start line, during the race and the finish line! 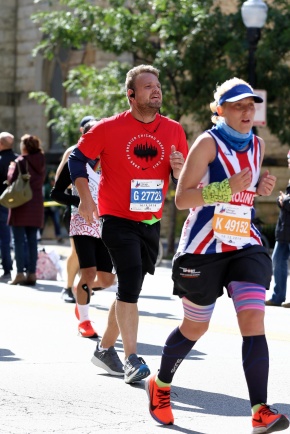 The Expo – Friday
The marathon puts on buses (these turned out to be school buses) on shuttles from four locations around Chicago to the expo venue. I was in line with what we thought would be for the second bus. But as time passed we didn’t have any buses yet, it was raining a little bit but luckily wasn’t feeling too cold. This was opening day and the first chance people would have to collect the numbers. It turned out they were having some problems with the buses but once we were on it really didn’t take long to get there and wasn’t too busy on arrival. It had only been open 30-40 minutes by this time. 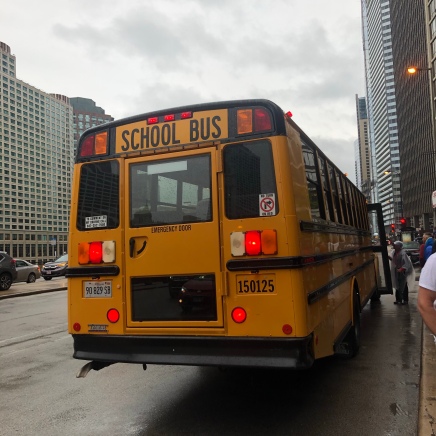 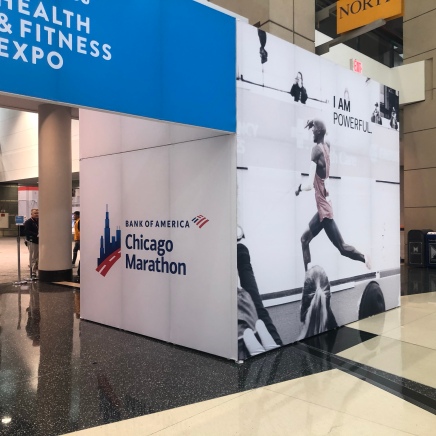 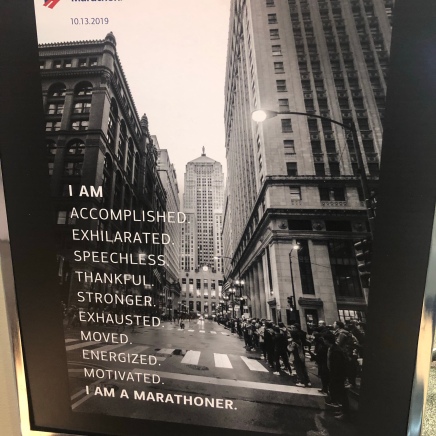 I collected a poster from the desk out front. Then queued for my 5k number first as that desk was right at the front. After that I then went for the big one, the marathon number. It was a very simple, quick and straight forward process. Then into get the t-shirt. I had ordered small and it was absolutely tiny, so quickly had to go and swap for a medium. Very strange sizing from Nike as pretty much all women had to get a size bigger than they had actually ordered. 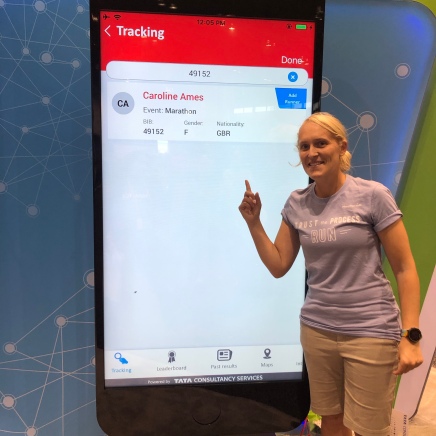 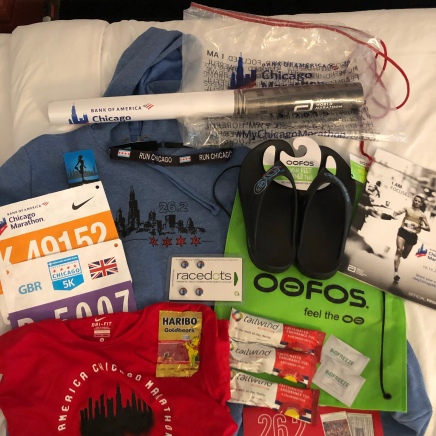 The expo itself was well spread out and organised. The only nightmare was the actual Nike section. I didn’t even bother I just walked through it and decided it wasn’t worth the craziness especially when the Nike store was within walking distance of my hotel. I left at around 11:15am as it was starting to feel very busy and that wasn’t something I wanted to be part of. It was better than NYC and probably on par with London for organisation.

The Start Line
With staying at the St Jane Hotel (great location by the way) it wasn’t going to take long to head to the start line. When you pick your number up it has the corral and a gate. This is where you will enter the park and go through security check. The queues take a little while and you are advised to go 2 hours before your start time. Make sure you have warm clothes, gloves and hat to keep you warm as 5-7am is rather cold! I had to buy a cheap hat and gloves to throw away as never thought to bring them with me. I did have an old tracksuit to throw away. The toilet queues as with any marathon are long so I went straight from one queue to another.  I didn’t bother with a bag check with my hotel only being a short walk away, I figured by the time I got my bag I could be back for a nice shower. Yes, my room didn’t have a bath! 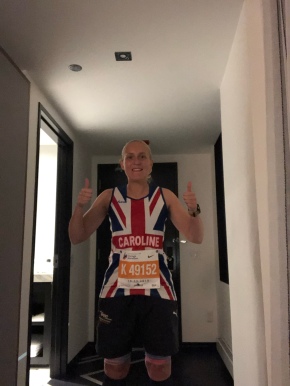 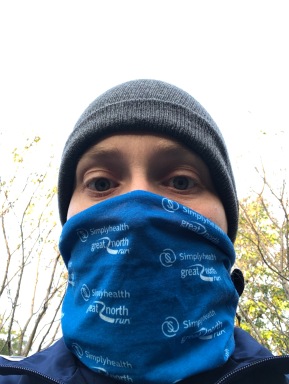 The corrals fill up early and I was lucky to be in with a fellow Brit (Michele) and we had a great laugh and time taking away any pre-race nerves! Also a proposal happened before the start time as well (this was in corral J).

The Race
My training had gone very well in all honesty and I was excited to see if I could eventually break the 4:30 barrier. This has been a long term goal for the past couple of years now. I knew the GPS on watches etc was going to be truly awful so at the expo I picked up a tattoo from the pace team. I found this easier and better to use than the wristbands and it was all there. I was ambitious and went for the 4:20 finish time tattoo. In my training and pace that was more than possible plus I know I fade during the second half of the race. I used the mile markers to check my watch time and I had a 2 and a half minute advantage at the half way point to finish sub 4:20. While this was more of a dream than anything, it worked out perfectly. In London this year I went with the 4:30 pacer and it felt too slow at the start. So going at the faster pace earlier worked for me and I set a new PB of 4:25:59. Knocking 13 minutes of my previous PB set in London 2019!

Parts of the race were truly beautiful with some amazing views going over the bridges and getting up close and personal with the different buildings and neighbourhoods. Some of it I seriously cannot remember though, something happens to you during a marathon and your mind goes blank about seeing certain things. The drag queen’s singing and dancing was a particular highlight but I cannot remember which mile this was at.  My ultimate favourite thing (other than getting to the finish line) was Bon Jovi – Livin’ on a Prayer playing at the half way point. I threw my arms up in the air along with so many other runners to the “woah were half way there, ohhh livin’ on a prayer” it was a great moment because of obviously the lyrics but Bon Jovi are my all time favourite band ever.

The GPS was well off for the first 3-4 miles but it seemed to sort itself out if you checked what distance your watch had on it to the mile markers. This was until miles 15 and 16 were my watch told me I had ran each mile around 6:20 pace. Which of course I knew wasn’t anywhere near right! I do think it’s important to be prepared for this if you run Chicago as most people now rely on this during training. Get a tattoo at the expo! I’d say that is my top tip!

The finish line
Seeing the countdown from 800m to 400m to 200m to go is an amazing feeling and I managed to push my pace back up for the final 2km. Something I’ve got much better at over the years finishing strong! Reaching the finish line I managed to find a little bit of space even if it meant running slightly further and flung my arms in the air hoping for at least one photo. Your moment of glory, the months of hard training all worth it. On finishing you then keep moving forward, volunteers congratulating you and you get your medal. I waited in a small queue so I could get mine off legend Paula Radcliffe and now former marathon world record holder (at this point in time I thought she still was). It was an amazing moment as she really is an inspiration. I grew up watching her finishing the Great North Run for so many years, met her at the London expo in 2016 before my first ever marathon, so to receive my medal after my 6th marathon finish was a special moment. 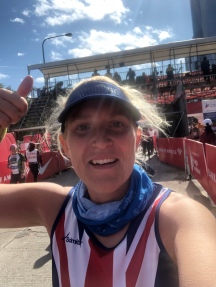 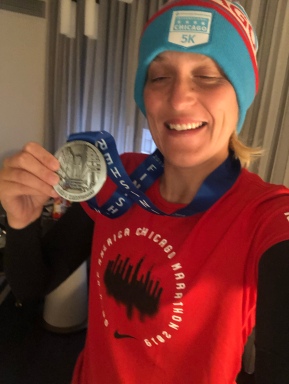 After getting your medal everything is on different tables, so the cups of Gatorade, bottles of water, apples and then the cans of beer. It made it difficult to carry everything especially being wrapped in the space blanket but I’m guessing some of that is to reduce plastic waste?

Something I was shocked about was the fact my phone was actually working. Considering the GPS during the course I though no chance of my phone working. I even managed to FaceTime my Mam and catch up with messages of support on WhatsApp from people who had been tracking me. Which was amazing!

At the end of a marathon everyone always checks you are ok and you check other runners it just happens. I had a little wander back to my hotel which I’m sure was further away than the previous day but I guess that is what happens after running 26.2 miles!!!