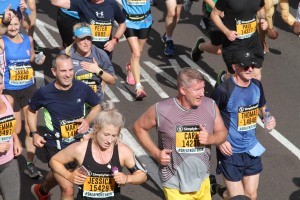 Last year I fell back in love with the Great North Run and it made me realise I could push harder with my running. So from that I did the Run Everyday in January challenge, Manchester and London Marathon’s in April and then the Sunderland half marathon and Gateshead 10k. Two events that I have added to my yearly events list. So in the build up towards this years Great North Run I was feeling tired. That is the easiest way to sum up how I have been over the past two months. July and August were a struggle as my legs always felt heavy when I was out running. Something I was so gutted about as in June I was back down to running 8:30 minute miles over long distances.

Setting a new half marathon PB back in May, how on earth have I gone from that to this being my worst ever Great North Run? It is something that is going to play on my mind for a long time I am sure, even though I have another half in 4 weeks (Kielder) and then 7 weeks until New York Marathon.

Something seemed strange for everyone at the GNR this year and a lot of people found it a struggle. Yes, the weather was hotter than everyone expected but surely it wasn’t actually that hot? I don’t know but it was a tough day. I pretty much gave up after 5k which was just crazy as I ran that at a decent pace and what I had been doing recently so no big issue with that. I guess there’s not really much you can do when your head goes, your legs will keep working even when they hurt but when your head gives up it is the most difficult race to finish. I am therefore hoping that does not happen again and that I can fight against that happening.

I then reached a point where I would ask people if they were ok considering so many people were collapsing and ambulances throughout the route. In all my years I had never seen it this bad before. Luckily everyone was ok afterwards and the medical teams and people watching along with fellow runners were outstanding! The photos you can see above were captured after crossing the finish line when I was thanked by Vanessa who I helped finish along the coast road. So while my race did not go to plan I helped others, I also helped a guy called Jamie who caught up with me while waiting for the medals and that was another thank you hug.

Some how it turned into an emotional race and I was ok when I saw a few people I knew even stopping to talk to them. But when I saw my Auntie it was breakdown time which then caused panic. I think I need to stop putting pressure on myself to hit a certain time and focus more on the distance. Big learning curve this year and my finishing photos are awful! 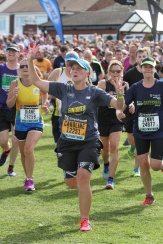 After this though and torturing myself, hating the Great North Run. When two days later I received an email saying that my membership has expired. I obviously renewed it very quickly and therefore have a place for three more years!