The game I had most been looking forward to in all honesty the first World Cup game in 2018 for Ronaldo in his fourth World Cup were he could become the fourth player to score in four World Cup’s! He certainly did not disappoint and looked more than up for the game even during the National Anthems, his stance the way he was singing he was switched on for this. We didn’t have to wait long for his first goal when it came from the penalty spot after 4 minutes!

With Ronaldo completing his hat trick with a truly outstanding free kick in the 88th minute to claim a well deserved draw for Portugal it was therefore easy to forget that they had been in the lead twice in the game, with Spain working hard to get back into it and then take the lead. Two goals from Diego Costa who certainly offers a great outlet when they use his strength and determination in the right way, and that incredible goal from Nacho probably won’t get the credit it more than deserves!

I thought Isco was outstanding for Spain and was a big driving force in everything they were doing especially when they were behind. I felt as though Spain didn’t look as dangerous until they eventually took the lead before that the passing seemed to be slower as Portugal just let them have it in their own half.

At the start of the game Spain did not look organised and the early penalty seemed to shake them and therefore took them longer to get into shape defensively. Portugal had an incredible chance to make it 2-0 with an amazing counter attack but failed to put the ball in the back of the net despite making it a 3v1. 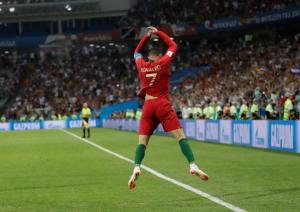 Ronaldo deserves all the credit coming his way for this performance and starting the golden boot race off in incredible fashion. He plays in a different way for his country compared to Real Madrid and he really is a joy to watch, incredible seeing the best player in the world turning it on in such incredible fashion on the biggest stage of them all.

This has also set a truly incredible standard for the up and coming games and I fear that it will be hard to match it in all honesty, lets just hope though that this is the start of a truly special and entertaining world cup with brilliant play and tough tactical battles allowing the best players to really show what they can do!

Just a couple of stats on Ronaldo that was his 51st career hat trick, it was the first free kick he has scored in a major tournament after 45 attempts!