Sergio Aguero’s first ever World Cup goal came in this game and you would be perfect fine in thinking that it would then be easy for Argentina to push on and score more right? Well, that is very wrong! Iceland have continued in fantastic fashion the form they demonstrated in Euro 2016. This made for a very interesting tactical match.

All eyes were on Messi as he was playing his first game in the 2018 World Cup but let’s not forget the other talented players Argentina have in their squad. Iceland now more recognisable thanks to the terrific Euro 2016 campaign and it was certainly going to be an interesting match. The entertainment certainly did not disappoint and it was very good to watch.

Iceland are a very organised team and it would seem Argentina did not prepare well enough for that, struggling to break the lines and get into the box. I felt as though Argentina really should have moved the ball quicker and had more movement from the front players, who constantly kept trying to get the ball down the middle. It was a little bit strange that they had no plan b. Surely they would have known how Iceland were going to set up. The thing is though before and after their first half goal Iceland actually had a couple of good chances to score more goals, helped by the truly awful Willy Caballero who looks to be a liability in goal. Nothing different from his time at Manchester City I guess! 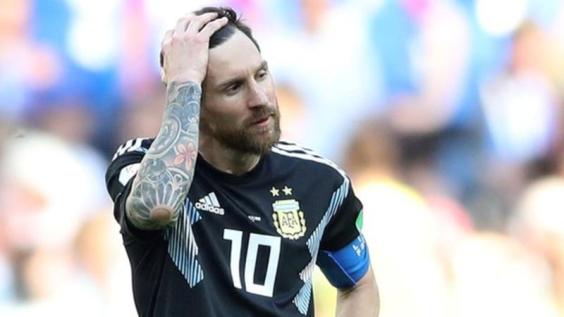 It was a very bad afternoon at the office for Lionel Messi as he was denied from the penalty spot with the goalkeeper saving his tame effort, which wasn’t far enough in the corner. After that he seemed to try very hard to score which did not come off with the fantastic defending from Iceland with players putting their bodies on the line to prevent conceding anymore goals. He now shares an unwanted recorded of having the most shots in a World Cup match (13) without scoring a goal! I guess things can only get better for him in the next games.

I am left feeling very proud and happy for Iceland the way they play with such determination and enthusiasm. Never giving up with each and every player willing to put their bodies on the line for their team!